This past December, Sheboygan County was placed on the moderate nonattainment list due to not meeting certain ozone standards. The Wisconsin Manufacturers and Commerce (WMC) is asking the U.S. Environmental Protection Agency (EPA) to reconsider the decision.

When the EPA considered Sheboygan County a moderate nonattainment area to the 2008 Ozone National Ambient Air Quality Standards (NAAQS); basing the decision on what most consider flawed monitoring data.The location of monitoring data equipment catches downwind air from areas outside of Sheboygan County; limiting potential growth within the counties business, tourism and bringing a new population to the area. 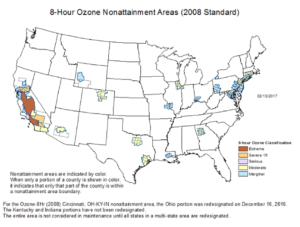 Moderate nonattainment: the quality of air is worse than marginal in the NAAQS.

The WMC, Wisconsin Department of Natural Resources and Sheboygan County businesses argue the EPA’s decision is based on Cross State Air Transport data that picks up downwind air particles from Chicago, Indiana and Milwaukee areas. The EPA acquires data from a monitor located at the Kohler-Andrae State Park, (along Lake Michigan) that does not capture the maximum downwind impacts from Sheboygan County, but rather the downwind from southern cities stated above.

Another monitor is located in Haven, six miles northwest of Sheboygan. The data recorded here is within the 2008 standards, but three years of validated data was not available until after the EPA’s decision. The timing of the EPA’s decision did not allow the Haven monitor data to be used for use against the 2008 standards but may be used for future nonattainment decisions…

With new EPA Director Scott Pruitt, there is hope that regulations and the Cross State Air Transport issue can be reviewed in greater detail. Currently, the EPA is transitioning to the 2015 ozone standards and dropping the attainment levels from 0.075 parts per million to 0.070 ppm; creating discretion on counties from Kenosha to Door County.